Hrithik Roshan is rumoured to be dating singer Saba Azad and they are closer than you think! While the two were previously spotted that the actor’s family lunch, now Saba who is currently sick, gave a shoutout to her rumoured beau’s family for pampering her.

Saba took to her Instagram handle and dropped a picture of her meal, including a pizza and pasta sent by Hrithik’s family as she is recuperating. Calling them ‘bestest’ humans, she wrote, “When you’re home sick but have the bestest hoomans ever feeding you. Thankee @kanchan_roshan @suranika @pashminaroshan”. 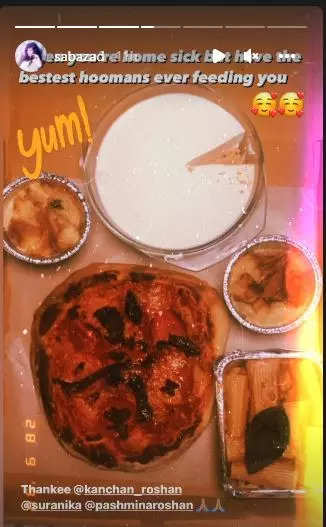 Recently, Hrithik broke millions of hearts when he amplified his rumoured girlfriend Saba’s upcoming concert with Naseeruddin Shah‘s son on his personal Instagram story and shared, “Kill it, you guys.”

Apart from this, Saba also hit headlines when joined the Roshan family over lunch. A picture from their private get-together has now gone viral which was initially shared by Hrithhik’s uncle-composer, Rajesh Roshan. In the picture, Saba and Hrithik were seen with his mother Pinkie Roshan, his sons, uncle Rajesh Roshan among others.

For the unversed, Hrithik was earlier married to Sussanne Khan, and is was later blessed with two sons, Hridhaan and Hrehaan. They parted ways in 2014.

Meanwhile, on the work front, Saba was last seen as Pipsy in the web series ‘Rocket Boys’. On the other hand, Hrithik who was last seen in ‘War’ will be next seen in ‘Fighter’ with Deepika Padukone.

Popular contemporary Ukrainian authors you must know about