Actress Kareena Kapoor Khan recently jetted off to an undisclosed location with her kids, Taimur and Jeh Ali Khan, sister Karisma Kapoor and her son Kiaan. On Tuesday evening, Kareena took to social media and gave a glimpse of her dreamy holiday.

Bebo shared a picture of Taimur and Kiaan while enjoying at the beach in their swimming shorts. The picture also features scenic beauty and a perfect sunset view in the backdrop. Along with the picture, Bebo wrote, ‘Brothers’ followed by heart emojis. Have a look: 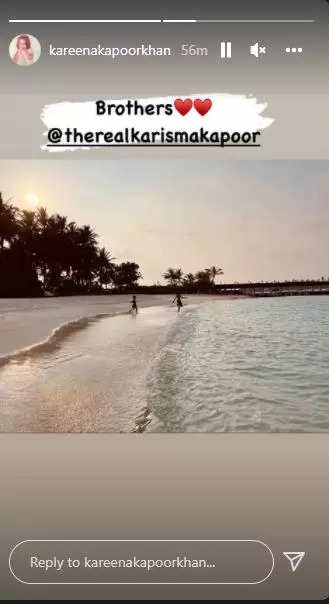 On Monday afternoon, the Kapoor sisters were seen leaving the city with their kids. In a video shot by the paparazzi, Karisma was seen pulling Jeh’s cheeks while entering the private airport.

Recently, Karisma’s son Kiaan turned a year older. Kareena took to Instagram and dropped a sweet picture of him with Taimur. She also penned a birthday note that read, “May we always eat pizza in bed…♥️nothing more funner than that big brother♥️we love you so much our precious boy Kiaan♥️Happy birthday darling heart ♥️🎈🎈 @therealkarismakapoor #lolo Ka beta #birthday boy.” Have a look:

On the work front, Kareena will be next seen in ‘Laal Singh Chaddha‘ with Aamir Khan. The film is slated to release this year in August.