Shah Rukh Khan and Deepika Padukone are currently in Spain where they are shooting for their upcoming film, ‘Pathaan’. Now, a few leaked pictures of the actors from the sets of the film have gone viral on social media.

Check out the photos here: 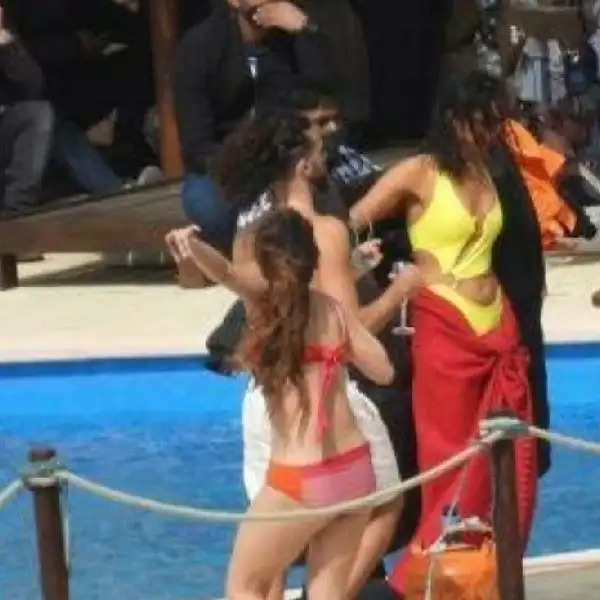 In one of the pictures, Shah Rukh is seen flaunting his washboard abs as he poses in a shirtless avatar outside what looks like a villa. Dressed in green pants, the superstar is seen showing off his long hair. In another picture, Deepika is looking absolutely ravishing in her red outfit. The other pictures are reportedly from the song shoot.

Apart from Shah Rukh and Deepika, the film will also star John Abraham in the lead role. This is the first time the trio has collaborated on a film. This Siddharth Anand directorial is one of the most awaited films in Bollywood. It is slated to hit the theatres in January 2023.

Meanwhile, apart from this, SRK also has Rajkumar Hirani’s immigration drama in his pipeline. He has also been roped in for Atlee’s commercial entertainer where he will reportedly be essaying a double role. The film also stars Sanya Malhotra and Nayanthara in lead roles.

Deepika, on the other hand, has films like, Nag Ashwin’s untitled next with Prabhas, and ‘The Intern’ with Amitabh Bachchan. John is currently awaiting the release of ‘Attack’ with Rakul Preet Singh and Jacqueline Fernandez and Mohit Suri’s ‘Ek Villain Returns’ co-starring Arjun Kapoor, Tara Sutaria and Disha Patani.

China's COVID outbreak fueled by Stealth Omicron; here's what it is and symptoms to watch out for