A fan-made collage of Anupam Kher has been doing the rounds on social media. It has a photo of his character from ‘the Kashmir Files’ alongside Heath Ledger’s ‘Joker’. Along with the pictures are words that read, ‘Performances that world will never forget’.

Kangana Ranaut recently shared the picture on her Instagram story and reacted to the same. She wrote, ‘New blockbuster hero in town…And for a change inko acting bhi aati hai’. 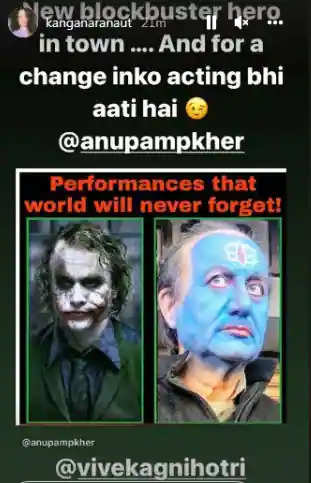 The fanmade collage was earlier shared by Anupam on Twitter. He had written, “Anonymous compliments are the best because you know they aren’t trying to gain anything out of it!! Thank you my anonymous friend for making this. I am delighted to see it!! #TheKashmirFiles @vivekagnihotri.”

Anonymous compliments are the best because you know they aren’t trying to gain anything out of it!! Thank you my an… https://t.co/H9jjQZqTTV

Talking about the success of the film, Anupam had told Zoom Digital, “People are watching this film and the growth it has witnessed is because it is the truth that was pushed under the rug. People are suddenly seeing that.”

Directed by Vivek Agnihotri, ‘The Kashmir Files’ revolves around the exodus and killings of Kashmiri Panditsin Kashmir in 1990. It also stars Darshan Kumaar, Pallavi Joshi and Mithun Chakraborty in key roles.