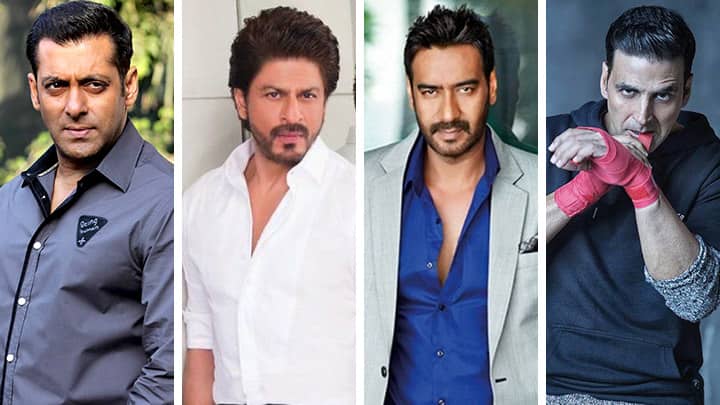 It is obvious that they earn a lot of money each year in their filming career. Bollywood is growing fast at a massive rate that it can even overtake Hollywood in terms of the numbers of film production.

Shahrukh Khan or SRK is also known as King Khan of Bollywood. He is one of the most popular and the best actor in the Bollywood industry.

Salman Khan is known by many names in the Bollywood industry such as Dabangg Khan due to his personality and style.

Salman was born on 27 December 1965 in the state of Madhya Pradesh, India. Salman Khan is a movie actor, producer, and Bigg boss tv show host. He has received so many awards which include National Film Awards and Filmfare Awards. Salman Khan was starred in some of the most popular Bollywood movies such as Sultan, Kick, Bodyguard, Ek Tha Tiger, Tiger Zinda hai etc. He is one of the highest-paid actors in the Bollywood industry right now.

Amitabh Bachchan was born on 11 October 1942. He gained popularity in early 1974 with the movies like Zanjeer and Devaram. Amitabh has become a great source of inspiration for those who are new in the entertainment industry and who really want to become a big actor like him. He has won a lot of awards which include the National Film Award for the Best action film and Critics Award for Best Actor. With big earning amounts he is one of the richest Indian celebrities.

Aamir Khan was born on 14 March 1965. His first acting performance was as a child artist in 1970 hit Yaadon Ki Baraat. He is an Indian film actor and producer. Due to his great success in the film industry, he has become one of the most popular and influential actors in Indian cinema.

He has also received a lot of awards which also includes 7 Filmfare awards and 4 National Film awards. With his achievements, it is not that surprising that he is one of the most richest Bollywood actors.

Hrithik Roshan is an amazing artist with many skills such as acting and dancing. Has always been an entertainer who is liked by millions of his fans because of his unique personality. He also has a pretty big female fan following. Hrithik Roshan is also considered one of the most attractive Bollywood celebrities in India.

We are not just talking about Bollywood actors net worth but also about artists of south Indian films. Rajnikanth is one of the most popular actors, producers, and screenwriters in Indian movies. He primarily works in South Indian movies industry. He has also won many awards in the South Indian industry, especially from Tamilnadu movies cinema. He has also been honored with Padma Bhushan and Padma Vibhushan from the Government of India.

Tanhaji has become the biggest movie of Ajay Devgan. He has been a part of back-to-back super hit movies in recent times. His real name is Vishal Veeru Devgan. Ajay Devgan is not just an Indian actor but he is also a film director and producer. Till now he has participated in hundreds of movies and most of these movies are very well-loved by the Indian audience. Ajay Devgan has also won 2 National Film Awards and 4 Filmfare Awards.

His full name is Ranveer Singh Bhavani. Ranveer Singh has participated in many popular movies such as Gully boy and Padmaavat. Ranveer Singh is also known for clothing styles that are very very well-liked on the internet due to their uniqueness.

Ram Charan is a famous South Indian actor who is in Telugu films. His movies are also watched all over India when they are dubbed in Hindi and other languages. He is one of the highest-paid actors in the Telugu film industry. So it is not that surprising when you hear that he is also one of the richest Indian actors.

So this was a list of the Top 10 Indian actors in India. Which one among these is your favorite Actor?

Please share your important opinion in the comments down below.

To read more interesting articles like this go to our homepage

With its rich history, culture, and artistic heritage, Hinduism...

Hindustan Aeronautics Limited (HAL) which is a state Run...