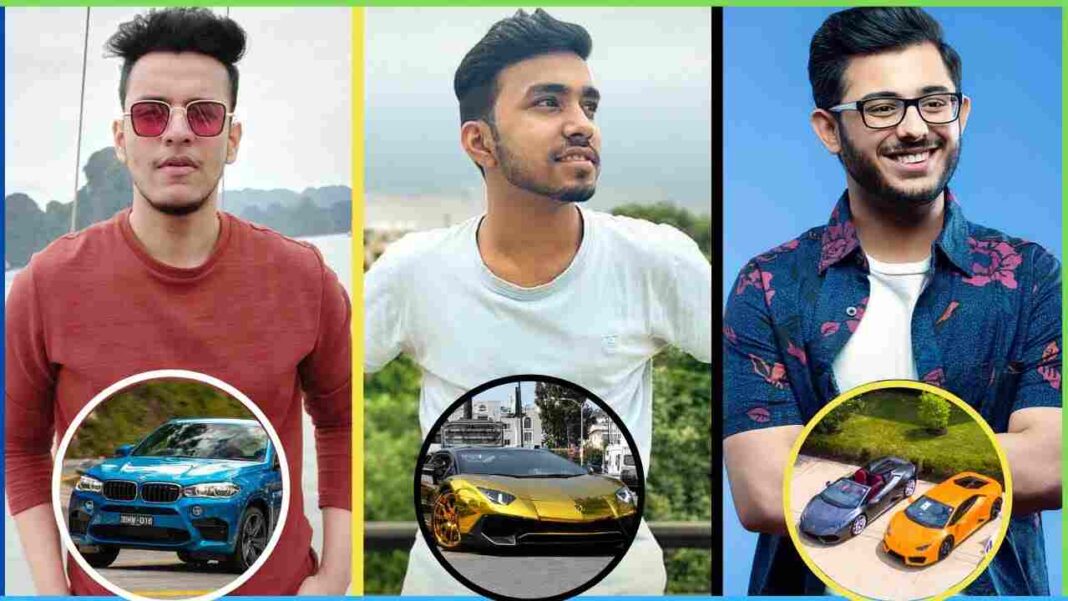 The gaming industry is on a boom in India right now. But most of this gaming Hype is only limited to Smartphone Android games and other online games.

That is why one of the first Indian gaming Unicorn startups that reached a 1 billion dollar valuation is only focused on mobile and online money-related games. But India had to start somewhere and this is the start of a new era in which the Indian gaming industry take the world by storm.

So in this list, we are talking about the top 10 gaming YouTubers in India who are widely popular for their content and for their gaming skills. This list is based on their popularity and the numbers they have gained as followers and fans.

Techno gaming is a channel that has more than 28 million. The owner of this channel Ajay who is also known by the name Ajju Bhai. This is the kind of YouTuber that has not revealed his face till now to his audience. He Usually focuses on games like free fire GTA V and Minecraft.

The journey of this YouTube channel started 3 years ago and today he gets millions of views when he posts YouTube videos.

This YouTuber Ajay was born in Ahmedabad in the state of Gujarat India. Ajay is also a software engineer who works on other things as well in his life as a job.

This is a YouTube channel with more than 20 million subscribers on YouTube. This channel is operated by Ujjwal Chaurasia. He is also known for games like Minecraft and GTA V. Today when he posts videos he gets views on them. With that being said I hope you are not surprised that he is among the top 10 gaming YouTubers in India because with the numbers that he gets he is totally among the top gaming YouTubers of India.

Lokesh gamer is also a youtube among the top 10 gaming YouTubers in India. He a YouTuber who generally posts videos about Garena free fire which is the most downloaded game in 2020 all over the world. His real name is Lokesh Raj Singh. He is also known by the name Diamond king on the internet. He currently lives in Hyderabad Telangana in India. He currently has more than 12 million subscribers on his main YouTube channel. He is also on his Instagram and other profiles where he regularly posts videos and photos that are related to him.

He posted his first video on 7th April 2019. The languages which are mainly seen in his YouTube channel are Hindi and English. He also has hobbies like listening to music and traveling.

A_S gaming or AS Gaming

This is a YouTube channel with more than 12 million subscribers and millions of views. Channels YouTube per real name is Sahil Rana who is also known as AS gaming on YouTube. He has played in countless squads and by constant playing, he has really improved his gaming skills.

He also has a second channel with the name AS Army. The main languages that belong to him are Hindi and English. His date of birth is unknown to us but his hobbies are reading and listening to music.

He began his YouTube channel on 10 May 2015. He used to post animated content at first and even had a viral video that obtained over 2 million views. But, he received 2 copyright strikes as a result of using copyrighted music in his video. Due to which he couldn’t add content on the channel for 3 months.

Ankit Sujan also known as Gyan Gaming is an Indian Youtuber and his channel named is ‘Gyan Gaming’, he has 9.25M subscribers. he uploaded the content of Garena Free Fire (essentially the most downloaded videogame in 2020, on this planet). Ankit was Born on the third of November in West Bengal, India. His greatest good friend is AS Gaming and Raistar and AS Gaming, and Gyan Gaming uploaded the content of his assortment. Gyan Gaming, additionally recognized for his identify in-game alias Gyan Sujan. He boasts over 1.1m followers on his Instagram account. His Free Fire UID is 70393167.

How can we exclude carryminati from the list of top 10 gaming YouTubers in India? Carryminati (Ajey Nagar) is an Indian Youtuber.  Ajay is often known as Carry and Carryminati. Carry began his Youtube channel in 2008 When he was solely 8 years.

Currently, Ajey is a well-known YouTuber and his Channels on Youtuber are Carryminati And Carryislive. He got here into the limelight after he roasted well-known Youtuber Bhuvan Bam’s (BB KI VINES) Video.

June 1999 is the birth time of Carry Minati inn Faridabad, Haryana, India. Carryminati is the Most Popular Indian Youtuber. Since his Childhood Carry needed to be a Youtuber and when he was solely 8 years. he began his Youtube Channel. Currently, He is energetic on youtube and his Channels are Carryminati and Carryislive. Ajey posts streaming videos each day on his Channel Carryislive.

With all this known it’s no surprise that he is among the top 10 gaming YouTubers in India.

He is also one of the top 10 gaming YouTubers in India. He started his YouTube content by posting content that includes PUBG & GTA 5. He posted videos of GTA 5 with modifications [mods]. He pranked folks on PUBG with comedic voices impersonating well-known stars of India, together with his most well-known look as Hrithik Roshan.

Later, he posted ideas and methods on the superhit recreation Granny, comparable to “How To Escape At 3 AM” and many others. A video named “Mythpat Channel Trailer” could be discovered on the channel, although it’s not the precise channel trailer. The subsequent factor up on his channel was PUBG Challenges, like “0% Sensitivity Challenge” and different challenges. On the primary of April 2019, he posted a video titled “I Am Hindustan Gamer” stating that he’s the proprietor of the channel Hindustan Gamer. It was an April Fools joke.

After that, he began off with Minecraft. He tried out particular methods and used mods to make his gameplays extra attention-grabbing. He began constructing secret residences and posted them on YouTube, whereas a few of them have been even on Subscribers’ request. As his viewers grew, they demanded to see his face, since he hadn’t revealed his face but. In his first Q&A, he was near revealing his face, however, a remark towards the face reveal satisfied him to not.

With thousands and thousands of followers on social media and 9 million + subscribers on YouTube, he’s simply among the many well-known lately too, however, who is that this Dynamo gaming in actual life? In this text, we are going to check out the man Dynamo, his life as a famend PUBG Mobile Player, and the journey of Aditya to turning into the face of the Indian Gaming Community. So he is also a part of the top 10 gaming YouTubers in India.

He was born in Mumbai on 18th April 1996 in a Marathi household. His father, Deepak Sawant, is a faculty instructor. Currently, he lives together with his household in Lokhanvala Complex Andheri West Mumbai.

He was born in the capital city of Delhi. He has a youthful brother, Abhishek Malhan. Triggered Insaan is an amazing entertainer who attracts a young audience. His content is based on making these children laugh. He also has two-channel. On his main channel, he posts funny roasting content. While on the 2nd channel he posts gaming videos.

So this was a list of The top 10 gaming YouTubers in India. So please share your views in the comments down below and tell us who is your favourite.

Also please enable the notification of our website by pressing the bell icon in the lower left corner.