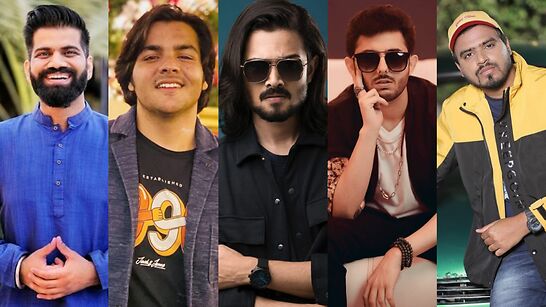 As we are looking forward to the future, we are going to see a lot of content creators on the youtube website. But the ones who have made their home in our hearts will always be remembered.

So now it’s time to look back and take a look at some of the top content creators on the youtube platform. Yes, we are talking about the top 10 most popular YouTubers in India. This list is not just based on the numbers but also the popularity of these YouTubers. In this article, we are not going to consider any businesses and brand channels operated by a group of people.

Bb ki vines (Bhuvan Bam) is the most popular and currently the biggest content creator in India with more than 5 million subscribers with millions of views daily on his videos. Bhuvan Bam has become a big internet sensation in the YouTubers community with great support and viewers engagement on his youtube channel BB ki Vines. Bhuvan Bam has achieved it all in a very short period of time.

Bhuvan bam is a very well-known face for his comedy videos as well as his big part in music. He is a singer by profession and most of his income comes from the live shows in which he performs. He lives in New Delhi and his aim behind his vines is to bring smiles to everyone’s face.

Bhuvan has been doing comedy and entertainment since he was in school. He used to make random comedy videos in starting and they were really appreciated by his friends and family.

His very first video was The Chakhna Issue which got something 10-15 views which he has uploaded to his page.

He himself plays different characters in his videos and he has his unique style of working. Counting all of this, it’s no surprise that he is among the top 10 YouTubers in India.

Must read – Get Unlimited Real Instagram Followers And Likes Daily

Amit Bhadana is another popular YouTuber who is widely loved in India by his viewers. He has over 3 million subscribers on his youtube channel and yeah, he has taken a good place in the hearts of his fans. He easily falls in the list of top 10 YouTubers in India.

He was born on 7 September 1991 in Faridabad. In starting he used to publishes his videos on Instagram Facebook. Amit Bhadana has got so much fame and followers through his creativity.

Amit Bhadana is also popular for his talking accent which always influences people and he also uses shayaries in his video which ultimately results in more creativity.

Sandeep Maheshwari is a well-known face for his motivational videos and his events all over India. Sandeep Maheshwari is a motivational speaker. His youtube channel has currently over 4 million subscribers. Some of you may be wondering that how much does he earn from youtube, well the answer is zero. He has never monetized his motivational videos on youtube which is really a great thing about me. He is really a person who is most respected by his all viewers.

Sandeep Maheshwari started his photography profession in 2000. He did some freelancing jobs for numerous businesses. He also signed up with lots of marketing agencies in the year 2001. Unfortunately, he was unsuccessful to get the fortune in most of these businesses.

Vidya Vox is a singer who is very well known for her music videos and she is one of the most popular YouTubers in India. Her content is not just popular in India but her videos are watched all over the world as most of these music videos are in English. Vidya vox channel has currently over 3.9 million subscribers which is a massive amount.

She was born on 27 September 1991. She is an Indian Born American Youtuber and Singer. Vidya vox has a degree in psychology from George Washington University.

She started posting Western and Bollywood mashups on her YouTube channel over a year ago. She almost gained popularity in no time as she is a very talented girl.

He was born and raised in Ulhasnagar in India. Earlier he used to post funny videos on other social media platforms such as Instagram and Facebook.

He is a well-known YouTuber who is known for his roasting videos and his gaming videos on his two different channels. Both of these channels are very popular and his content remains the trending video whenever he posts a video on his main Channel. Carryminati is currently 22 years old. His real name is Ajay Nagar and his net worth is currently 4 million US dollars.

His first main channel is Carryminati and his other channel that is the gaming channel is known as the Name carryislive. On his second channel, he only posts gameplays videos and his reaction to this game and other clips. Carryminati has also been a part of many controversies and he has been in news for many reasons and for many of his controversies.

Gaurav Chaudhary is a technical YouTuber who is based in UAE. He runs and operates his channel and his other businesses from the UAE. He generally posts content in the Hindi language. He also has two channels, among which his main channel technical Guruji is the channel that is based around Tech gadgets whereas his second channel Gaurav Chaudhary is his personal channel where he posts vlogs.

He started his YouTube channel back on October 18, 2015, with the support of another technical YouTuber known by name of Sharmaji technical.

Harsh Beniwal is a total fun creator who posts funny videos on his YouTube channel. His content has evolved a lot. At first, he just used to post content inspired by other foreign creators but with time he was able to make good content of his own. Now he is a full-fledged creator who posts really awesome long videos and web series which entertain millions of people in India. With all that I hope you can understand how he is among popular YouTubers in india.

Harsh Beniwal is currently 25 years old has around 13 million subscribers on his YouTube channel. He was born in 1996.

Nisha Madhulika is a female YouTuber who was born in 1959 in the state of Uttar Pradesh, India. She is a chef who has a YouTube channel that shares her dishes and her tips and tricks to cook great food. She has around 12 million subscribers on the YouTube channel by the name Nisha Madhulika.

There are many more YouTubers as well who are currently getting a massive amount of views and subscribers. Some of them are Nisha Madhulika, Carryminati, Harsh Beniwal. Other names will be added soon along with their profile in this article.

Round 2 hell is an Entertainment channel which 23 million subscribers. It is one of the fastest-growing YouTube channels in the Indian entertainment online industry. People think that this channel will soon overtake some other channels and reach even new Heights.

Please share your important opinion in the comments down below about the top 10 most popular YouTubers in India.