Katrina Kaif treated fans to a brand new advertisement video featuring Dhariya Karwa on the internet. She took to her Instagram handle and dropped an enticing video clip where she is seen blindfolding the ‘Gehraiyaan’ actor and asking him to pick his favourite mango drink judging by its aroma.

Sharing the video, she wrote, “Kya aap hai ready?To take the sabse khaas challenge with me? 🥭.” As soon as the post went live, netizens took to the comment section and praised the sparkling chemistry between Kat and Dhariya who shared the screenspace for the first time.

Amid this, a few also tagged Katrina’s husband-actor Vicky Kaushal in the comments to tease him. A user jokingly wrote, “@vickykaushal09 bhai idhar dekh kya ho raha hai yeh (Vicky brother see what’s happening here).” “You both look so good together,” added another. 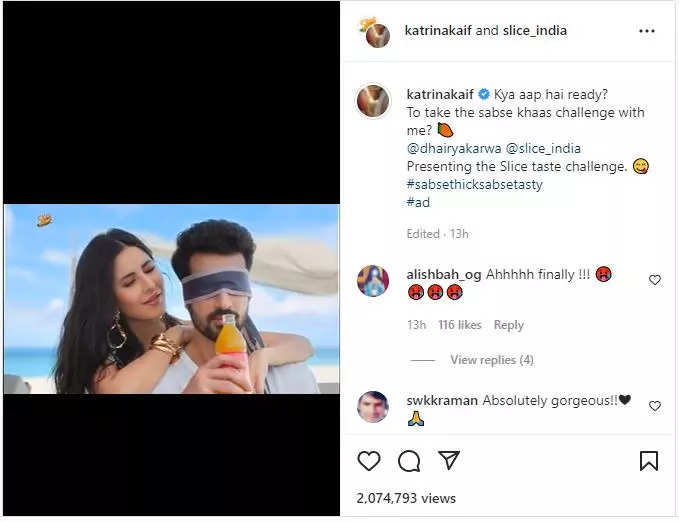 Meanwhile, the video has grabbed a lot of attention on social media, however, fans are eager to see Vicky’s reaction in the comment section. While this marks Katrina’s first work with Dhairya, interestingly Dhairya made his Bollywood debut with Vicky’s hit film ‘Uri: The Surgical Strike’.

Vicky recently made headlines with his heartwarming post on International Women’s Day that featured an adorable ‘saas-bahu’ moment between Katrina and his mother Veena Kaushal.

On the work front, Katrina recently wrapped up filming for Salman Khan’s ‘Tiger 3’, releasing on 21 April 2023. Apart from this, she will also be seen in Farhan Akhtar’s directorial comeback ‘Jee Le Zaraa’ with Priyanka Chopra and Alia Bhatt.