Shah Rukh Khan’s daughter Suhana Khan has returned back to Mumbai after completing her studies in New York. She recently made headlines after she attended a cricket event with her brother Aryan Khan. The brother-sister duo was seen representing their father at the event. Suhana is also very active on social media and is often seen sharing pictures with her fans. On Monday evening, she took to her Instagram story and offered a glimpse of her chill time with her baby brother AbRam at their house, Mannat.

Suhana shared a picture of AbRam while he was busy playing a video game on IPad. The picture also features their doggo sleeping on a chair and the breathtaking view from the balcony. She shared the picture without any emoji or caption. Have a look: 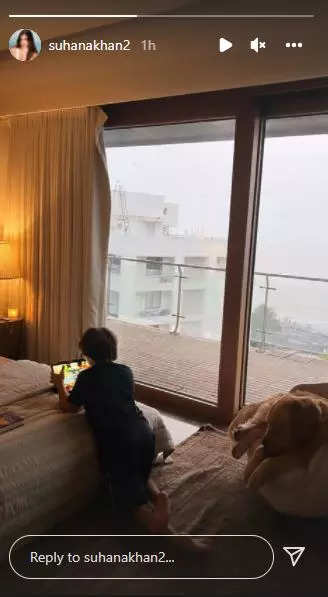 Meanwhile, Suhana recently wowed everyone with her gorgeous saree picture. She sported Manish Malhotra‘s red saree for a function. Her BFFs Shanaya Kapoor and Navya Nanda Naveli were all hearts for her traditional look. Have a look:

On the work, Suhana will be reportedly making her big Bollywood debut with Zoya Akhtar‘s Hindi adaptation of ‘The Archie’. On the other hand, SRK recently jetted off to Spain for ‘Paathan’.